Posted on March 3, 2018 by grandmapeachy 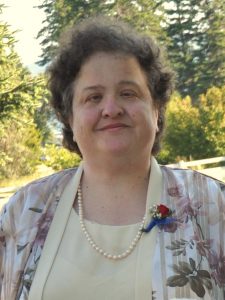 Ani H. Manjikian You will be missed.

On this Sabbath Day, March 3, 2018, I lost a friend to cancer. We had never met in person but we spend many hours together.  I first met Ani Manjikian after reading and reviewing her first book in 2015. My daughter had asked me if I could read and review the book because it was not a genre she enjoyed reading.  I enjoyed her first published book, Spirit of the Lone Horse, and my review was one of the first I published on this blog. I sent her the link to the review and that was the beginning of a friendship that grew over the next two and a half years.

When Ani was ready to enlist others to help with editing her second book, Do You Believe in Legend? I volunteered. I don’t recall if she asked me if I would help or I just volunteered, but, in either case we spent the next few months working together on her second book. This second book was particularly meaningful to Ani.  She wanted Do You Believe in Legend? to be worthy of the title she had chosen. The experience was a growing experience for both of us.  Ani had many more stories to write. Sadly they are lost to us now.  I would have loved to help with the next book in her series. Maybe a family member will pick it up and try to finish it for her in the future.

Working together to edit Ani’s book was not the only thing that we did. Many times Ani would be discouraged and I spent hours chatting with her to encourage her to lift her spirit. We spoke of the things of God often.  Usually I would tell her what scripture tells us about different things pertinent to her life at that moment. I never asked her directly if she knew Jesus as her Lord and Savior. However, our conversations were such that I felt I was talking with someone who knew Jesus and understood my point of view even if she may not always completely agree.  It is my hope that in some way I may have helped her to mature in her faith. It always seemed that when our conversations ended she was encouraged and uplifted. If for some reason I failed her by never asking her directly if she knew Jesus as her Lord and Savior, then Lord forgive me.

In January Ani told me she had a doctor appointment she was worried about because she’d already survived cancer diagnosis several times including melanoma. Just after her appointment I asked her the outcome. A couple days later she informed me it was not good, that cancer was in several of her organs and had already spread to her brain and she was hospitalized for intensive treatment. That was the last communication I received from her. Every few days I would message her that I was praying for her. But, the battle was too intense for her to be wasting time on the internet and she never responded. I know that these cancers can advance rapidly so I started looking into any way I could contact someone in her family. I sent messages to two people I thought were probably her mom and either a sister or sister-in-law from her friends list on Facebook because they had the same last name.  It was not until today that I got a response that she was near the end, then a few hours later informed that she had passed.

It is my belief that she passed into the arms of Jesus. If I thought otherwise, I would be devastated that I did not do more to ensure she knew my Lord. But, I believe that she did know Him. My prayers now are for her family who loved her more dearly than anyone except Jesus.  She will be missed and I look forward to meeting her in heaven.

I am a retired grandmother and amateur quilter. Generally I do not discuss religion and politics with people other than my family and even then I do more listening than talking. Because I dislike confrontation this blog is a way for me to express opinions that I hold on these and other issues without having to delve into controversial discussions with others who may not agree with me. I am also an avid supporter of indie authors. There are a lot of great books that are not available through traditional publishing and I believe that these stories need to be brought to the attention of the reading public.
View all posts by grandmapeachy →
This entry was posted in Personal Reflections and tagged authors, cancer, death, Memorial to Ani Manjikian, mourning. Bookmark the permalink.