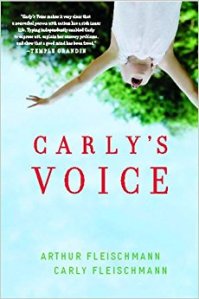 Carly’s Voice by Arthur Fleischmann with Carly Fleischmann is another traditionally published book that I had wanted to read for some time. My interest in autism was initially sparked by my sister-in-law whose sister has autism. I’ve encountered autism several times in my life and currently the community in which I reside has an unusually high incidence of autism among children. Carly’s Voice has been on my reading wish list for some time.

This story of the impact of autism on the family of Carly Fleischmann was heart breaking from the beginning. The battle the parents, especially the mother, went through pulled at my heart strings.  I experienced deep empathy for her parents while going through the trials of first getting a diagnosis, then fighting to get the best education for their nonverbal autistic child. The author did an excellent job of imparting the emotional feelings of knowing that his child would never have the same kind of life as her siblings and knowing that he would not be able to get to know his daughter and do things with his daughter that a father looks forward to doing.

When the people who worked with Carly daily discovered her ability to communicate through the typed word her whole world opened up. Carly contributed her insights and point of view in the final chapter.  She has become an advocate for people with autism and is living proof that autism doesn’t have to keep one from accomplishing their goals and dreams.

I recommend this book to anyone who has been touched by autism even as remotely as the relative of a relative or friend. Carly’s Voice gives us a much better insight into the mind of a person living with autism and just how misunderstood they are even by those who are closest to them and love them the most. We can learn to be more accepting and compassionate of those with autism. They are not the autism, they are people with hopes and dreams just like the rest of us. An excellent read, well written and totally engaging.

I am a retired grandmother and amateur quilter. Generally I do not discuss religion and politics with people other than my family and even then I do more listening than talking. Because I dislike confrontation this blog is a way for me to express opinions that I hold on these and other issues without having to delve into controversial discussions with others who may not agree with me. I am also an avid supporter of indie authors. There are a lot of great books that are not available through traditional publishing and I believe that these stories need to be brought to the attention of the reading public.
View all posts by grandmapeachy →
This entry was posted in Personal Reflections. Bookmark the permalink.