Posted on January 9, 2017 by grandmapeachy 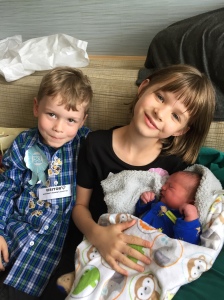 I was going to write a totally different “Monday Morning Musings” piece today but I just wasn’t into it, so to speak. While standing outside with my daughter my hand found a puff ball in my coat pocket. I determined that it was probably from a toy and had been put in my pocket with the intention of repairing some child’s stuffed toy. I don’t remember the incident that put the little white puff ball in my pocket so it will go into the donor bank at Grandma Peachy’s Stuffed Toy Hospital. There is a small plastic container that things like that go into in the event the original toy is brought to the hospital for repairs. Right now there is a brown ear and it’s stuffing in the container. I don’t know where the toy that it belongs to has gone. I hope he didn’t get sent to the trash morgue.

There have been a number of animals and dolls that have spent the day, or night, or even a few days in intensive care before their major surgery in the hospital located in my sewing room in the basement. It is a delight to see the happy faces of my grandchildren when I return a stuffed toy that has successfully recovered from surgery. I can remember a couple of teddy bears, a doll, and my most critically injured patient was Sonic the Hedgehog. He had a couple of limbs missing and a serious neck wound. He was several days in intensive care, first because one of the amputated limbs had to be recovered from the accident site and it took a few days for the owner, my grandson, to find the limb. Then it took a day or two in the intensive care unit until Dr. Grandma Peachy had the courage to attempt such a delicate procedure. He was by far the most difficult toy to repair. All repairs are carefully done by hand and Sonic was a stiff patient. The needlework necessary was tricky because of all the sharp angles. Especially the ones around the neck wound.

I’ve done one eye surgery where the button eye of a doll was lost. Thank goodness for the two mechanics boxes of drawers full of buttons. I found one that closely resembled the remaining eye in color and size and replaced the missing button eye. Usually there is just a seam that has come undone and stuffing is protruding. Those are relatively simple repairs. If perchance too much stuffing has been lost as a result of the injury I dig into my stash of remnant bits and pieces of batting for a stuffing transfusion. Once I had a doll as my patient with her sewn on gown coming off the neck leaving a large slashed neck. She was the next most difficult repair. But she was a softer patient and only spent a day in the hospital. Most simple injuries like the burst seams only take a few minutes of outpatient care. Thankfully, as a quilter I have just about every color of thread there is so I never have a problem with matching the colors.

It is my hope that when the grand kids are grown they will remember fondly taking their well played with stuffed toys to Grandma Peachy’s Stuffed Toy Hospital for surgery and the TLC that they needed for resuming their active play life.

Blessings and May all my readers have a prosperous year in 2017!

I am a retired grandmother and amateur quilter. Generally I do not discuss religion and politics with people other than my family and even then I do more listening than talking. Because I dislike confrontation this blog is a way for me to express opinions that I hold on these and other issues without having to delve into controversial discussions with others who may not agree with me. I am also an avid supporter of indie authors. There are a lot of great books that are not available through traditional publishing and I believe that these stories need to be brought to the attention of the reading public.
View all posts by grandmapeachy →
This entry was posted in Family life, Personal Reflections and tagged Amusing anecdotes, family, family life, grandchildren, humor life, personal musings, stuffed toy repair, toys. Bookmark the permalink.