Posted on December 18, 2015 by grandmapeachy

Retired detective Danny Mancini is haunted by nightmares after he found out that paranormal creatures exist. All he wants is to forget them…especially a certain half-vampire. When cursed werewolves show up trying to kill him, he is forced to go back to the Paranormal Investigative Division for help against a powerful old enemy. What he was not expecting was a dead ex showing back up after twenty-six years.

Catch up on the first book in the Paranormal Detectives Series, Stake-Out. 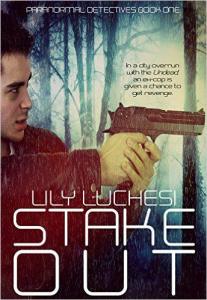 In a city overrun with the undead, an ex-cop is given a chance to get revenge…

Danny Mancini is on a case, following a murder suspect. When he catches him, he finds out that the perp isn’t even human: he’s a 200 year old rogue vampire!

The department doesn’t believe him, and puts him on early retirement, despite his many years of service to the Chicago Police Department, which sends him into a downward spiral.

Two years later, Danny gets an invitation from the beautiful, young and very attractive Detective

Angelica Cross to join a secret branch of the FBI to help her track down Vincent, the wayward vamp.

But renegade werewolves, meddling immortal witches and Danny’s strange visions of a life lived a century ago with Angelica make things more difficult than it should be.

Lily Luchesi is a young author/poet born in Chicago, Illinois, now residing in Los Angeles, California. Ever since she was a toddler her mother noticed her tendency for being interested in all things “dark”. At two she became infatuated with vampires and ghosts, and that infatuation turned into a lifestyle by the time she was twelve, and, as her family has always been what they now call “Gothic”, she doesn’t believe she shall ever change. She is also a hopeless romantic and avid music-lover who will always associate vampires with love, blood, and rock and roll.

Her interest in poetry came around the same time as when she was given a book of Edgar Allan Poe’s complete work. She then realized that she had been writing her own poetry since she could hold a pen, and just had not known the correct terms. She finished her first manuscript at the age of fourteen, and now, at twenty-one, has two contributing credits in anthologies and her debut novel, Stake-Out (Paranormal Detectives Series Book One), was published by Vamptasy Publishing on May 19th, 2015. Book two, Miranda’s Rights, will be released on January 8th, 2016.

I am a retired grandmother and amateur quilter. Generally I do not discuss religion and politics with people other than my family and even then I do more listening than talking. Because I dislike confrontation this blog is a way for me to express opinions that I hold on these and other issues without having to delve into controversial discussions with others who may not agree with me. I am also an avid supporter of indie authors. There are a lot of great books that are not available through traditional publishing and I believe that these stories need to be brought to the attention of the reading public.
View all posts by grandmapeachy →
This entry was posted in Indie Authors and tagged #BookCoverReveal. Paranormal Detective Series, #IndieBooksBeSeen., Lily Luchesi. Bookmark the permalink.