I received An ARC in exchange for an honest review. Fighting Back is the second book in the Harrow series. The story of Dax and Ivy Harrow continues in this book. 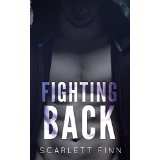 The Stark family seeks Dax after he left the family at the end of Fighting Fate.

Of all the books I’ve read by Ms. Finn this is my least favorite. I did like the book and the characters maintained their personalities from the first book. There was a well developed plot, though I did not engage in this book as I have in others including the first of this series. I haven’t identified why I was not as captivated. There was tension, risk, threats, mystery, action, romance, and explicit sex; all the elements of the other Scarlett Finn books I’ve read. In the previous book, Fighting Fate, Dax did things I didn’t like and wanted to slap him for being such an idiot. In Fighting Back I never felt that way; I did think this time Ivy pulled some stupid stunts. She allowed her independence to override her good judgement. I was not as drawn into her escapades in this suspenseful romantic novel.

Overall I give this a four out of five. Though I was not as engaged in the story as others of this author’s books I was still entertained.  The characters and plot were still well developed and the editing was superb. This book is for adults 18 and over because of the explicit sex and graphic violence.

You can find Fighting Back by Scarlett Finn on Amazon. Here is the link:

I am a retired grandmother and amateur quilter. Generally I do not discuss religion and politics with people other than my family and even then I do more listening than talking. Because I dislike confrontation this blog is a way for me to express opinions that I hold on these and other issues without having to delve into controversial discussions with others who may not agree with me. I am also an avid supporter of indie authors. There are a lot of great books that are not available through traditional publishing and I believe that these stories need to be brought to the attention of the reading public.
View all posts by grandmapeachy →
This entry was posted in Book Reviews and tagged #IndieBooksBeSeen., Book review, Fighting Back, indie authors, romance novels, Romance thriller, romantic suspense, Scarlett Finn author, supporting and Promoting self publishing Indie Authors. Bookmark the permalink.

1 Response to Book Review: Fighting Back by Scarlette Finn