Fighting Fate by Scarlett Finn is the first of her series of tough boy BD romance books. The subject matter for me was a bit tough to read. 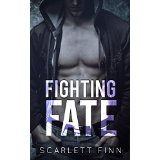 But I stuck with it and finished the story and will read the rest of the series as it is published. Dax is an enforcer for a drug cartel family and is called upon to participate in the kidnapping and brainwashing of a woman who disrespected the playboy son.

I did not like Dax and my distaste for him was strong through most of the story. Ivy was a strong female character and so easy to love. She was a fighter with a sassy tongue who could also play the game to convince her captors, except Dax, of her submission. The romance was shaky through most of the story because Dax was unable to trust or make the right decision.

The writing was excellent. It was a well edited book; I found only one typographical error in the entire book. The author did an excellent job of developing the main characters, especially the female lead, Ivy, who was easy to relate to. Dax was well developed as well, but, he was not as likeable as I prefer the romantic hero to be. He didn’t play the part of hero very well, but that was how the author wanted him to be, so she did an excellent job of portraying him in this light.  I just couldn’t  like him. There were times that I just wanted to walk up and smack him in the face and yell, “What the fuck is wrong with you, idiot?” He was a character that I loved to hate. Even at the end when he finally made the right decision I was angry at him for taking so long to stand up to the family and do the right thing.

The book could stand alone, however, there is obviously room for more of the story of their lives to unfold. I anticipate that unfolding in future books in the series. I will read the entire series.  I give this book a 5 star rating for good character and plot development and excellent editing.

I am a retired grandmother and amateur quilter. Generally I do not discuss religion and politics with people other than my family and even then I do more listening than talking. Because I dislike confrontation this blog is a way for me to express opinions that I hold on these and other issues without having to delve into controversial discussions with others who may not agree with me. I am also an avid supporter of indie authors. There are a lot of great books that are not available through traditional publishing and I believe that these stories need to be brought to the attention of the reading public.
View all posts by grandmapeachy →
This entry was posted in Book Reviews. Bookmark the permalink.