I just finished Demon Within by Julie Nicholls this week and found it a delight to read. It is the first book I have read by this author and was pleasantly pleased. This romantic fantasy takes place in a time of kings and castles, when princesses are used to form political alliances through arranged marriages. The story includes a bit of magic, political intrigue, steamy romance, and revealed family secrets. 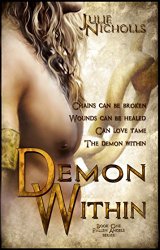 The characters are well developed and believable.  I found the story entertaining and engaging. It was one of those that I didn’t want to put down, but wanted to read straight through. Once I started reading I did just that.

Medieval fantasy is among my favorites and this romance did not disappoint. Eloise is a princess with magical powers over the elements. Kai of Darkmide is a former slave who instigated a rebellion freeing slaves and slaughtering the slavers. Kai’s reputation for brutality is widespread among the kingdoms. His army is the most feared. When her father arranges for Eloise to marry Kai, to form an alliance, the princess is fearful of what her future holds. Kai has his own issues with abandonment and abuse. The romance that develops is well written and the arranged marriage ultimately becomes one of mutual love and consent.

Demon Within is the first of her Fallen Angels series which, I believe, will be an epic series of good and evil, magic and romance. I recommend Demon Within to anyone who enjoys romantic fantasy.  Now I’m off to read the second of the series, Angel Within.

I am a retired grandmother and amateur quilter. Generally I do not discuss religion and politics with people other than my family and even then I do more listening than talking. Because I dislike confrontation this blog is a way for me to express opinions that I hold on these and other issues without having to delve into controversial discussions with others who may not agree with me. I am also an avid supporter of indie authors. There are a lot of great books that are not available through traditional publishing and I believe that these stories need to be brought to the attention of the reading public.
View all posts by grandmapeachy →
This entry was posted in Book Reviews, Indie Authors. Bookmark the permalink.

5 Responses to Book Review: Demon Within by Julie Nicholls